What is Polo all About?

A match consists of 6-8 chukkas, each lasting seven minutes plus up to 30 seconds of overtime. A horn is blown at the end of 7 minutes to signal to the players that 30 seconds remain in the chukka. During the 30 seconds, play continues until a team scores, the ball goes out of play or a player commits a foul. During the breaks players are able to switch ponies.

Play takes place on a field of about 300 yards (275 metres) long by 160 yards (150 metres) wide. In theory, that is about the same size as six soccer pitches. The goal posts, which collapse on severe impact, are set eight yards apart.

There are 4 players on a team with each player assigned a distinctly different role according to their position. The Number 1 player is essentially a goal striker whose primary role is to score goals. The Number 2 player is also a forward, but plays harder, especially on defence. Number 3 is the pivotal player between offence and defence who tries to turn all plays to offence. He is usually the highest rated player on the team. The Number 4 player (or back), is essentially the most defensive player whose primary responsibility is to protect the goal area.

All players are rated on a scale of -2 to 10 (the higher the better). Although the word ‘goal’ is often used after the rating, it bears no relation to the number of goals a player scores in a match, but to their overall playing ability. A player’s horsemanship, range of strokes, speed of play, team and game sense are the factors considered in determining their handicap. The team handicap is the sum of its players’ handicaps. the team with the lower handicap is awarded the difference in goals at the start of the game. For example, a 26-goal team would give two goals start to a 24-goal team.

Any time the ball crosses, at any height, the line between the goal posts, it is considered a goal regardless of who knocks it through, including the pony. After each goal, the teams change ends (i.e. switch the halves they defend). This allows both teams equal opportunities to score in case the field or weather is working to one direction’s advantage (equalise wind and turf conditions). The game is continuous and can only be stopped if a foul is called, an injury occurs to either a polo pony or rider, or if a player’s tack is broken. 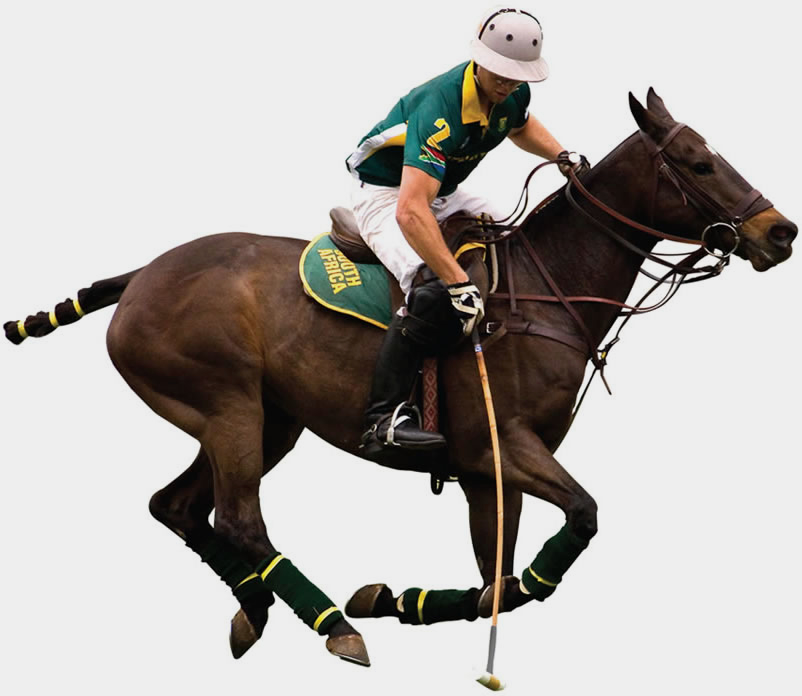 Hard surface, lined and strapped. The helmet protects the player from swinging mallets and balls travelling at speeds of nearly 100 mph.

Protects the player’s hands and creates better grip on the mallet.

A closely clipped mane eliminates interference between the pony’s mane and the mallet shaft.

Series of leather strappings and bit that give the player steering and stopping control.

Stops the saddle from slipping backwards.

Stops the pony from raising its head.

Typically made of bamboo or plastic composite. Mallet shaft is flexible and can make a complete arc under the pony’s neck or tail when swung hard. The stick head is made of hardwood and angled to allow a full swing flush to the ground.

Protective wrapping and safety boots protect the pony’s legs against contact with the ball.

Always coloured brown in polo. Attached to the knee pads for extra protection.

Causes less obstruction to the mallet while executing backhand and tails shots.

Different from jumping saddles which have extra pads. Special polo saddles balance the weight of the rider.